The image entitled Flamboyant Galaxy wins the public award for the 2017 edition of the Acfas “La preuve par l’image” competition.

An unprecedented image of the Perseus galaxy cluster submitted by Julie Hlavacek-Larrondo and Marie-Lou Gendron-Marsolais, both researcher at the Université de Montréal and the Center for Research in Astrophysics of Quebec, and by the scientific communicator Maxime Pivin Lapointe, wins the public’s award in the 2017 edition of the Association francophone pour le savoir (Acfas) competition. This is the first time that an astronomical picture wins a prize as part of this contest. 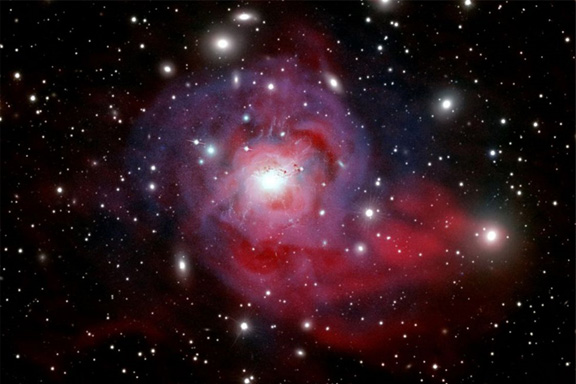 The image, entitled “Flamboyant Galaxy”, is a mosaic of several images that plunges us into the heart of the massive Perseus galaxy cluster, located at a distance of about 240 million light years from Earth, and shows us in details the effervescence that reigns there.

The gas between the galaxies reaches 60 million degrees Celsius and emits copious amounts of X-ray light. One of the image was captured by NASA’s Chandra X-Ray Observatory (in blue). The giant elliptical galaxy NGC 1275, whose spectacular filaments are imaged in the optical by the Hubble Space Telescope, is located in the center. This galaxy hides an active supermassive black hole propelling powerful jets of particles into the cluster.

Other images also come from two telescopes in New Mexico: the Sloan Digital Sky Survey, which has a very wide field of view to map the entire sky, and the Karl G. Jansky Very Large Array, equipped with new receivers, which made it possible to image the radio emission of these particles (in pink) with an unparalleled level of detail, revealing an array of complex mysterious structures.

This image was instrumental in the discovery of a giant wave running through the Perseus cluster. The research was led by Stephen Walker of NASA’s Goddard Space Flight Center and Julie Hlavacek-Larrondo, and was published in the June issue of the Monthly Notices of the Royal Astronomical Society (see also this news item).

The CRAQ warmly congratulates the authors for this great success.

“La preuve par l’image” competition, launched by Acfas in 2010, is devoted exclusively to images from scientific research carried out in all fields of knowledge. For the second consecutive year, Acfas partnered with the Natural Sciences and Engineering Research Council of Canada to open the competition to all Canadian researchers.

Since May 5, the public has been invited to vote for its favorite image. Winners of the four awards (three jury awards and one public award) were finally announced in the October 22 edition of the TV show Découverte, on French CBC. The winners will receive their award during the Acfas’ annual banquet, on 8 November. All the images selected for the 2017 competition can be admired at the Biodôme until the end of December, as part of an exhibition produced jointly with “Espace pour la vie”.