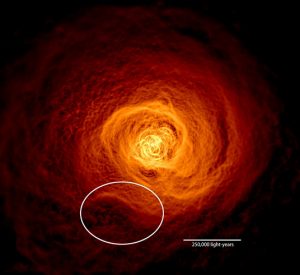 Combining data from NASA’s Chandra X-ray Observatory with radio observations and computer simulations, an international team of scientists has discovered a vast wave of hot gas in the nearby Perseus galaxy cluster. Spanning some 200,000 light-years, the wave is about twice the size of our own Milky Way galaxy.

The researchers say the wave formed billions of years ago, after a small galaxy cluster grazed Perseus and caused its vast supply of gas to slosh around an enormous volume of space.

“Perseus is one of the most massive nearby clusters and the brightest one in X-rays, so Chandra data provide us with unparalleled detail,” said lead scientist Stephen Walker at NASA’s Goddard Space Flight Center in Greenbelt, Maryland. “The wave we’ve identified is associated with the flyby of a smaller cluster, which shows that the merger activity that produced these giant structures is still ongoing.”

Chandra observations have revealed a variety of structures in this gas, from vast bubbles blown by the supermassive black hole in the cluster’s central galaxy, NGC 1275, to an enigmatic concave-shaped feature known as the “bay” that couldn’t have formed through bubbles launched by the black hole.

Radio observations obtained by two researchers from the Université de Montréal and the Center for Research in Astrophysics of Quebec (CRAQ), Professor Julie Hlavacek-Larrondo and graduate student Marie-Lou Gendron Marsolais, show that the bay structure produces no emission, contrary to what scientists would expect for features associated with black hole activity. In addition, standard models of sloshing gas typically produced structures that arc in the opposite direction. “Our radio observations proved crucial in interpreting the data obtained by Chandra,” explains Professor Hlavacek-Larrondo.

A paper describing the findings appears in the June 2017 issue of the journal Monthly Notices of the Royal Astronomical Society and is available online.